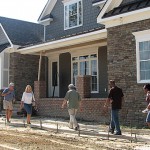 Published in the Suffolk News Herald. Story by Emily CollinsWith a little more than a month until the official opening of Homearama, several of the featured houses have opened their doors to hundreds of visitors for a sneak preview this weekend.Residents from across Hampton Roads made their way to the Riverfront at Harbour View to tour the houses, which are still under construction, during the Dusty Boots open house Saturday, and more are expected as the event continues today.There is a lot of curiosity, said Mark Edwards, the senior vice president of East West Communities, the developer of the Riverfront. A lot of people like to see the houses at this stage. Without all the furniture and decorations, they can visualize their stuff in here.Of the nine homes that will be featured in Homearama Oct. 15-30, seven were open for the Dusty Boots tours. Two houses were not open to the public at the request of the owners.While most of the major construction is completed on the homes, a lot of interior design and landscaping is not finished.Guests made their way up makeshift plywood or mulch pathways to see the details of the home construction.Many of the guests who attended the Dusty Boots preview came out to see the progress of the houses and get ideas for their own homes.Realtor Cecilia Warren of All/Pros realty, which represents the builder for one of the Homearama homes, said she thinks people can see the specifics of the building better at the preview event.With a Dusty Boots event, they get to see the attention to detail, she said. They really get to see the quality of the home.Skip Stark said he visited the preview with his wife, daughter and grandson for that exact reason.We always come out for previews, because without the furniture and all the people, you can see the space better, he said.While most people came out just to look, the builders and the real estate agents made sure people knew the houses were most definitely for sale if they were interested.Tony and Leisha Belk, of Yorktown, said they didnt come out to buy a new house but were open to the idea if the price was right.If it jumps up at us and its a reasonable price, we might buy something, he said.Stephen Quick of Stephen Alexander Homes, one of the Homearama builders, said he was encouraged by the number of the people at the event, as well as by their attitude about the housing market.Everybodys upbeat about the market, and they are realizing that Homearama homes are such good prices, he said.Houses in the show start at $550,000.Although Brett and Cheryl Scudder dont plan to buy a Homearama house, they wanted to see the details of the homes and get ideas for their house.We always comes to these, Brett Scudder said. We thought wed get a jump on Homearama.The Dusty Boots tour is still going on today from 1 to 5 p.m. The homes are located off of Bridgeway Drive in the Riverfront at Harbour View.