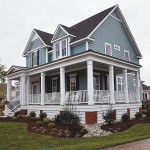 And that’s exactly what interior designer Sharon Goodwin portrayed in the decor throughout the two-story coastal Victorian-style home.

Furniture from La-Z-Boy Furniture Galleries and Goodwin Interiors will make relaxation easy, as will serene landscaping and pavers around the pool area, which were chosen by readers of The Virginian-Pilot.

Robert Nye of Renaissance Outdoor Contracting implemented the choices and said he was pleased with the selected look.

Readers also helped design a children’s bedroom in the $674,900 house. A football field wraps around the room’s walls, and real pigskins were utilized as part of the window cornices. Dallas Cowboy touches blend well with the hues of blue throughout the house.

Goodwin decided to set up the downstairs bedroom as a study.

“We thought it would be a great idea to put a reporter in there,” she said.

Hence, newspaper fabric was used for the window treatments, and a typewriter sits on the desk for an old-fashioned touch. Issues of The Virginian-Pilot with some historic headlines from days gone by are displayed on the walls, and the attached bathroom’s walls features an array of newspaper jargon.

Pilot writers will make appearances at the house during the show’s two-week run.

Alex Quick noted the dwelling also features plenty of contemporary elements, such as the huge kitchen pantry and the room’s unique back splash. There’s no wasted space thanks to built-in spaces, including areas for flat-screen TVs in the family room and room over the garage and lockers in the mud room.

The inviting pool area, which includes a pool house, covered lanai and fire pit, cradles the house for a reason, Alex Quick said, noting, “People can congregate in a lush, quiet, relaxing setting.”

After Homearama, of course.