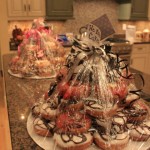 Hundreds of Homearama visitors got special treats from several local restaurants at the home showcase Monday.

Five restaurants shared the spotlight with the nine houses at the Taste of Suffolk event at Homearama and offered samples of special dishes to guests at no charge.

The Broken Egg Bistro, River Stone Chophouse, Smithfield Station, Primo 116 and OdoodleDoos Donuts each set up base at one of the houses, used the kitchens to put the finishing touches on their creations and handed them out to guests to enjoy.

The food was judged by a group of local food writers and by the Homearama guests for the Critics Choice and the Peoples Choice awards.

Primo 116 won over the judges with its homemade ricotta gnocchi with crumbled sausage sauce, which were both made from scratch.

However, OdoodleDoos captured the publics hearts, and stomachs, with its pumpkin spice, brownie batter and red velvet specialty doughnuts and received the Peoples Choice Award.

Homearama is open to the public through Sunday from noon to 9 p.m. every day through Oct. 30. Tickets are $10 for one day and $17 for two days.