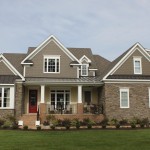 Most days, Pat and Mike Moore find themselves immersed in the resort life: leisurely bike rides around the lakes, 18 holes on a sprawling championship golf course and evening strolls to a waterfront park, where sunsets kiss the Nansemond River.

They gather with neighbors for cookouts, parties, tournaments and fitness activities and special events throughout the year. Tennis and volleyball courts tempt them, as do two pools and a clubhouse, and the nearby commercial corridor with shops, eateries and more.

Had the Moores not purchased their home in The Riverfront at Harbour View themselves, they might think they’d been lured to perpetual vacation.

The couple had watched the neighborhood develop for some time, Pat Moore said of the community, site of Fall Homearama.

In fact, for centuries much of what’s now known as northern Suffolk had been farm land and home to a scattering of families and businesses.

Artifacts unearthed in the late 1980s and early ’90s, during the pre-development stages of the Harbour View area, are believed to have been left by 17th-century Colonists, according to a series of history-oriented articles published by the Suffolk News-Herald.

Major highway connectivity, including the opening of Interstate 664 to the area in 1992, ushered in growth potential for northern Suffolk and an increasing number of families and businesses happy to stake claims throughout the territory.

The 600-acre Riverfront, being developed by East West Communities and already home to about 1,000 families, sprouted where the Nansemond and James rivers meet, offering luxury-style condominiums and custom single-family houses. Prices run from the mid- $200,000s to more than $2 million.

Pat Moore noted the intentional balance of nature – plenty of open common space, riverfront parks, meandering walking paths and a respect for wildlife – with the amenities that draw neighbors out to mingle.

A year after its grand opening in 2000, The Riverfront hosted its first Homearama, a showcase of custom homes presented by Tidewater Builders Association.

The event attracted more than 100,000 attendees. A decade later the community, now in its final phase of development, again hosts the popular event, which runs today through Oct. 30.

It features nine new homes facing a center-island park and within walking distance from one of two lakes and Riverfront Park’s serene pier and gazebo.

Though TBA has presented Homearama for 30 years, each event shines in its own light, organizers said.

“The market, location, city, developer and individual group of builders that participate bring a unique and exciting element to each and every Homearama,” said Bill Halprin,the association’s president. “Each development has a different site layout, neighborhood setting, and specific amenities that set (it) apart from (the others).”

Developer East West Communities specializes in master-planned resort-style offerings within preserved natural settings in Virginia, South Carolina and Florida. Its other local developments include Founders Pointe and Eagle Harbor in Isle of Wight County, Gatling Pointe in Smithfield and Riverwatch in Gloucester.

“We all spend an extraordinary amount of time in the early planning stages of a community, ” said Mark Edwards, East West Communities partner and senior vice president/broker at East West Realty.

“Before, we were probably more nervously excited about the opportunity (to host a Homearama),” he said, but “10 years later, it’s become a very happening place. It’s amazing what’s taken place in Harbour View.”

Mike and Belinda Arthur moved to The Riverfront at Harbour View from Hampton in 2009 and quickly acclimated to monthly community gatherings. Today they regularly hang out with 20 to 25 couples.

“We’d looked at a lot of neighborhoods,” recalled Mike Arthur, 51, a Newport News firefighter. “This was convenient to everything, and we were just sold on the community itself.”

Arthur’s happy to share this “hidden secret” with Homearama visitors, adding, “Suffolk has really boomed since we’ve been here.”

Pat Moore reflected on her new life away from her children in Richmond.

“It takes a lot to love a place when you have no family here,” she said, but “a lot of people are in that same boat. Here, friends are like family.”

And, she added, “There’d be no excuse for being bored. Our grandkids come and they think they’ve come to Camp Riverfront.”