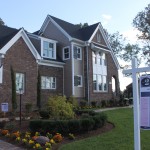 It might be the fastest growing city in Virginia, but that doesnt make Suffolk immune to the troubles in the real estate market.

In North Suffolk a multitude of new homes make for a special kind of market, but real estate experts say the abundance isnt hindering sales in the area.

Ron Foresta, president of the resale division of Rose & Womble Realty Co., said North Suffolk is no worse off than the localities that surround it.

Actually, northern Suffolk is a reflection of the entire housing market in Hampton Roads, he said. Properly priced, good homes in a good location will sell.

Throughout Hampton Roads, the housing market is still grim, but better than it was a year ago.

In Hampton Roads, sales of existing homes were down 12.9 percent from June but up 9.7 percent from July 2010, according to Real Estate Information Network Inc.

In Suffolk, the same pattern seems to hold true.

In July, 124 homes sold in Suffolk, a marked improvement from 92 in July 2010, according to data from Housing Intelligence.

Mark Edwards, vice president of the Hampton Roads division of East West Communities, the group that developed The Riverfront at Harbour View and Founders Pointe in Carrollton, said he thinks North Suffolk homes stand a better chance of selling, because the location is more alluring to buyers who want to have quick access to the other cities in the region.

Its definitely a place people are moving into and not away from, he said.

Edwards said the market was especially tough last year, but this year has been kinder.

In fact, he said, the last 90 days have been the best the communities have seen in the past five years.

This year has been better for us than last year, Edwards said.

Kerri Woodward, the site manager at Parkside at Bennetts Creek, a Chesapeake Homes development off of Shoulders Hill Road, said she thinks North Suffolk is doing better than other parts of the state.

The military has saved our real estate market in Hampton Roads and North Suffolk, she said.

Like Edwards, Woodward said this year has been better to her company than last.

Parkside is ahead of its goal for selling homes this year.

I feel like were doing really, really well, Woodward said.

But North Suffolk seems to be faring better than its southern half.

In September, 65 properties around Suffolk received a foreclosure filling, according to RealtyTrac.

However, in the northern part of the city, only eight bank-owned properties are currently for sale.

Foresta said foreclosures tend to affect properties worth $400,000 or less in the area.

He said he estimates about one in every four homeowners owes more on his house that he could currently get for it. But that is only a concern for people who are looking to sell.

Unless they have to sell today, it doesnt really matter to them, Foresta said.

The Riverfront has dealt with foreclosures, but they havent been as big a problem there as they have been for other communities, according to Edwards.

Woodward said she has seen a couple of homeowners who opted to rent out their property when they were having trouble selling it and faced foreclosure.

The three real estate experts have very different properties in North Suffolk, but they agree on one thing: If its priced right and looks good, itll sell.

If they are in good shape, it seems like they are moving off the market, she said. If the location is right and the price is right, theyll move,

Foresta said if a home has a compelling price, it moves, whether its a 5,000-square-foot mansion or a three-bedroom home.

The only tough properties to sell right now are condominiums, and there are plenty of those around North Suffolk, he said.

When prices were running up, condos were more affordable, Foresta said. But now, single-family homes are the hot commodity.

Edwards said most of the properties in The Riverfront are moving at the same pace, even though its taking a little longer than it did five years ago.

The very large homes might sit on the market a little longer, but like the others, if theyre priced right and theyre in good shape, a buyer comes around eventually, he said.

Its important the property owners appropriately price their home, Edwards said. It is a tough real estate market, and thats why its more important than ever to make sure they show well.

Woodward believes the market will continue to improve.

I see it remaining stable and slowly getting better, but I dont think its going to turn around tomorrow, she said. I think weve hit the bottom, and well bounce around for about another year or so, and values will start to go up.

Edwards doesnt deny the market has been rough, but he thinks the change is coming.

I knew it was turning around in May and June, when we had several homes that had been on the market sell, he said. I know its a tough resale market, but were optimistic thats changing.