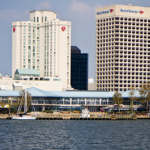 A developer wants to transform the downtown waterfront to include a new conference center, two additional hotels, an office building, marina and seafood restaurant.

Harvey Lindsay Development, a Norfolk-based company, pitched its $200 million plan recently in response to a request for proposals to redevelop Waterside. Under the proposal, the dated and struggling facility would be a thing of the past, one local bank might expand its downtown presence and another company would move its regional offices there.

The proposal, one of five city leaders have said they’ve received, would not require a tax increase but would ask the city to contribute about $76 million from what could be described as taxpayer money. It would also require the city to borrow about $16 million from parking bonds.

According to a copy of the proposal, which the Virginian-Pilot obtained, much of three city blocks would get a makeover and all would connect to the waterfront through an elevated walkway with massive views of the Elizabeth River.

City Manager Marcus Jones declined to comment Monday on the proposal, and Mayor Paul Fraim did not respond to a message left at his office. Harvey Lindsay President William A. Hudgins also declined to comment via email when asked about the company’s plans.

According to the proposal, Harvey Lindsay would partner with Clark Nexsen architects, W.M. Jordan Construction and Kaufman and Canoles Consulting on the project.

Modeled after the High Line in New York City, the elevated walkway would connect Town Point Park across Waterside Drive and Main Street to the Slover Library on Plume Street. Illustrations depict the walkway with exhibits from the Chrysler Museum, Virginia Zoo and Norfolk Botanical Garden.

As part of the proposal, Clark Nexsen would move its regional offices from the Military Circle area into a $26 million downtown office tower, which would bring 350 employees with an average salary of $65,000. Harvey Lindsay is also in discussions with TowneBank to expand its downtown presence to help finance the project.

A 180-room, 16-story hotel would be constructed adjacent to the Slover Library.

Harvey Lindsay would ask the city to pay for most of the $65 million conference center, a cost the city has agreed to pay in previous agreements with developers.

The group would also ask for about $7 million in performance grants for the office building, hotels, restaurant and marina. Performance grants are rebates of a portion of taxes paid by businesses.

It asks the city to spend $16 million for more parking, with the cost being paid by users. The plans also call for an additional $4 million from the city to pay for improvements to pedestrian walkways. That money would come from the general fund, which is funded by taxes paid by residents.

The conference center probably will be the most controversial and yet intriguing part of the proposal because it calls for Waterside to be demolished.

Three business groups urged the city in 2010 to consider demolishing Waterside, but many civic leaders, and a group of urban experts, urged the city to retain the facility. Constructed in 1983 as a festival marketplace, the facility’s blue, metal roof has become a symbol of downtown.

Although Waterside helped spark a downtown revival, it is now run down and more than half empty, officials acknowledge. Because MacArthur Center is now downtown’s shopping area and Granby Street has emerged as an entertainment center, officials have struggled with determining Waterside’s purpose.

However, Norfolk leaders have long sought a conference center, which they say would attract small, upscale meetings. City officials proposed several years ago to build a conference center and parking garage at Main and Granby streets in conjunction with a hotel. Although the project would have included large city subsidies, two developers backed out because of financial problems.

Harvey Lindsay has proposed building the Clark Nexsen office building and a 120-room hotel partly on the proposed conference center site at Main and Granby streets. A portion of the adjacent city-owned Selden Arcade would be demolished, but much of the building would be incorporated into the office building, with room for artists to continue to display their work.

The proposal would also rely on the existing Marriott and Sheraton hotels to essentially serve as anchors for the convention center, with the two new smaller hotels intended to expand the number of rooms downtown to nearly 2,000.

The conference center would offer 190,000 square feet of meeting space, including a 30,000-square foot exhibit hall. The hall could seat as many as 3,300 people.

Harvey Lindsay would also expand the waterfront marina and build a seafood restaurant there. Because the conference center would occupy less space than Waterside, waterfront parks would be expanded and harbor views would be restored for some downtown office workers.

The city has said that Jones will head a six-man committee that will evaluate all of the proposals. The council probably will be briefed on the proposals on Jan. 24 behind closed doors.

The city has agreed to make all five proposals public, but not until after a decision is made. The final call on which proposal is accepted is up to the council.

By Harry Minium
The Virginian-Pilot
January 17, 2012