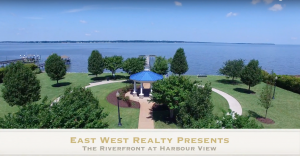 If you’ve ever dreamed of owning a new home on the river in The Riverfront, your time may be running out. East West Communities has released the last section of lots on River Park Drive. These last remaining lots, some with 115 to 145 of frontage along the Nansemond River start at $695,000.The Riverfront at Harbour View has been the most successful master planned community in the Hampton Roads area, having been named Best Community three times by the Tidewater Builders Association, and is home to one of the favorite golf courses in southeastern Virginia.

The Riverfront consists of approximately 1,300 homes and features resort style amenities in one of the hottest regions in Virginia. The northern Suffolk area has blossomed into one of the fastest growing high tech corridors in Virginia. Harbour View is centrally located to all of Hampton Roads, located just 15 minutes to Downtown Norfolk and 10 minutes to the Peninsula.