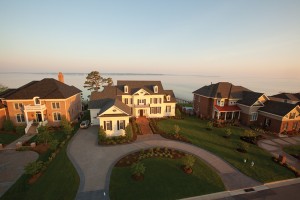 No community in Hampton Roads has received more accolades than The Riverfront. This waterfront neighborhood has twice been named Community of the Year,  three-times awarded Best Community, and is now the first recipient of the Hall of Fame for Excellence award from the Tidewater Builders Association.

Since it’s grand opening in April of 2000, more than 950 families have chosen to make this award-winning community their home.