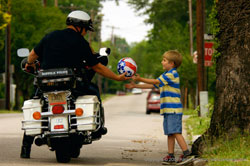 SUFFOLK, Virginia (July 27, 2010) The official motto for several years has been “It’s a good time to be in Suffolk…”, and now it seems like others have found that to be true, as well. Suffolk has been named as one of America’s 100 Best Small Cities to Live for 2010 by CNN Money Magazine. The magazine compared statistics from 746 U. S. cities with a population of 50,000 to 300,000 to make its rankings. Suffolk placed 91st and was one of only four Virginia cities to make the list. It was also the first time Suffolk had been received this esteemed recognition. Some of the factors considered in the selection included job and housing markets, quality of education, crime rate and overall quality of life, including leisure and cultural activities.

Of special significance is the city’s ranking in job creation due in large part to our diversified employment base, where we ranked almost 10 percentage points better than the average of the “best cities”, as evidenced by the wide variety of businesses and industries that have chosen to call Suffolk “home” since 2000. The magazine chose Suffolk in part due to our “nutty history every fall with a four-day festival that includes a demolition derby, a carnival, and a shrimp feast.” It further stated that our residents can “relax by fishing on Lake Meade or taking a canoe trip down nearby Dismal Swamp State Park… or eating at the many locally owned restaurants that serve Southern specialties.”

Learning of the prestigious designation, Mayor Linda Johnson stated, “We were thrilled to learn of Suffolk’s selection by CNN Money Magazine as one of the Top 100 Small Cities in America.    We are well aware of Suffolk’s unique and diverse offerings, from its historic downtown and rich farmland to its high-tech corridor and beautiful recreational offerings.  It is wonderful that others are learning what we already know: whether it’s to work, live or play…It’s a good time to be in Suffolk.”

It’s also a great time for Suffolk’s citizens and those in surrounding communities to explore and discover what this remarkable city has to offer. Whether reserving your spot on a Great Dismal Swamp National Wildlife Refuge Narrated Bus Tour or Canoe Trip, enjoying a performance or class at the Cultural Arts Center, partaking of a world-class meal at one of our renowned restaurants, or enjoying a T.G.I.F. concert or dazzling fireworks display with the family at Constant’s Wharf, you’ll find that the city is filled with unlimited opportunities.