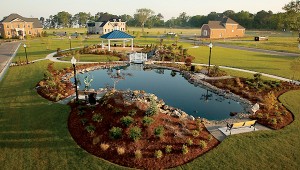 Homearama, the twice-yearly showcase of homes sponsored in Hampton Roads by the Tidewater Builders Association, will return to Suffolk this fall, officials announced on Friday.

The Riverfront neighborhood in Harbour View will host the event for the second time, making this the third visit to Suffolk by Homearama in 10 years. Last spring, the event came to Founders Point in Isle of Wight County, just across Chuckatuck Creek from the city.

“In Suffolk, we have some of the really premier housing communities (of Hampton Roads), so we were really not surprised” by the decision to return to the city, Suffolk Director of Economic Development Kevin Hughes said Friday afternoon. “This speaks highly to the things that are going on.”

About 1,000 families make their homes in the North Suffolk community, which features scenic views of the Nansemond and James rivers, along with a location within Harbour View, Suffolk’s fastest-growing retail and commercial area.

The community was developed by East West Communities, which was also the developer of the Founders Point subdivision.

“We feel extremely fortunate to work with East West Communities on another first-class event,” TBA President Bill Halprin said. “Their communities are known for their beautiful landscaping and upscale curb appeal, as well as the resort lifestyle they offer. They created a beautiful setting for our first Spring Homearama at Founders Pointe last year and we know we can expect even more of the same at The Riverfront.”

When Homearama came to The Riverfront in 2001, it drew more than 100,000 visitors to Suffolk. Local officials are hoping for similar interest this year, despite the lingering problems in the housing market.

“It gives us an opportunity to showcase not just the residential sections, but other areas visitors will be passing through,” Hughes said.

The last time Homearama was in Suffolk was in 2006, when the Pitchkettle Farms community played host. The Riverfront offers an opportunity that was not available for that event — retail sales.

The Harbour View area immediately surrounding The Riverfront hosts a variety of restaurants, spas and retail outlets ranging from boutique stores to big box retailers — much of which did not exist in 2001 — and Suffolk officials hope that visitors will take some time to explore the area, as well as the homes that will be on display.

“There are a number of different retail attractions in and around the subdivisions,” Hughes said. “We hope to get folks to check out the restaurants and shops, too.”

Hughes and the others in economic development already have begun brainstorming ideas for promoting the city before and during the Homearama event, which is scheduled for Oct. 15-30.

Eight to 13 homes situated around a large center island park will comprise the showcase. The lots will average a half-acre in size and sell for between $135,000 and $152,500. Prices for the completed homes are expected to start in the low-$500,000 range.