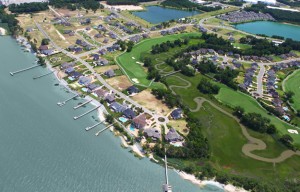 The Tidewater Builders Association announced Friday it will hold its fall showcase of homes at a community in northern Suffolk.The Riverfront at Harbour View, a development of East West Communities, will host the semiannual Home-arama in October. The community also hosted the show in 2001.The builders group said it plans to feature eight to 13 homes in the show, with prices starting just above $500,000. The association will hold a lot drawing for builders next month. The half-acre lots are priced from $135,000 to $152,500.”We have enjoyed great success with Homearama, the builders and TBA in the past, and we look forward to expanding on that success to make this the finest home show it can be,” said Branch Lawson, local president of East West Communities, in a statement.The builders association’s semiannual event is designed to show off the latest in home construction, decoration and technology, while marketing the builders and the community in which it’s staged.The fall show will be the second one in two years hosted by an East West Communities development. Founders Pointe, one of the developer’s projects in Isle of Wight County, was the site of the first spring Homearama in 2010.The fall show is scheduled for Oct. 15 to 30 at Riverfront at Harbour View, off Harbour View Boulevard in Suffolk. The last time it hosted the show, the 16 homes started at just less than $500,000 and went up to more than $900,000. At the time, it was the TBA’s priciest showcase ever.-written by Josh Brown