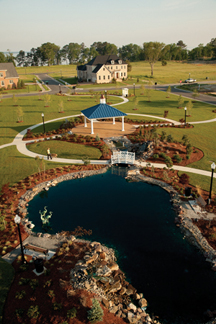 Suffolk News Herald – June 25, 2011Even as participating builders get geared up for construction on the homes that will be featured in the fall Homearama at The Riverfront in North Suffolk, the Tidewater Builders Association is looking for more contractors to take part in the event.The fall Homearama will feature at least 10 homes, ranging in size and style, and will include the latest trends in the home industry in the events third visit to Suffolk in 10 years.So far, seven builders are constructing the homes, located in The Riverfront at Harbour View, for the event that will take place Oct. 15-30.Select Homearama sites, which are priced from $135,000 to $152,500 and average half an acre in size, are still available, according to TBA officials, who have turned their attention to the fall event with the recent conclusion of the spring Homearama.The homes built at The Riverfront will range in size from 2,800 to 4,000 square feet and face a central park courtyard.Mark Edwards, a representative for East West Communities, the developer of the Harbour View community, said the home styles that will be featured are craftsman cottage, European cottage and Southern traditional.One of the Southern traditional homes, the Bucknell Place, is a Southern Living house plan and will feature a two-story front porch.Edwards said most of the houses will be brick and will have interesting detail work on the exterior.Also, several of the models will have first-floor master bedrooms, which is a popular trend in new homes, Edwards said.Every house will offer something unique, he said.Edwards said some of the houses will have themed designs. For example, one home, the Designer House, will feature work from several designers throughout its interior.Prices for the Homearama houses are expected to start in the low $550,000s.This event serves as our industrys buy now campaign, said Bill Halprin, the president of the Tidewater Builders Association, which sponsors Homearama. Its designed to stimulate people to take advantage of one of the best homebuyers markets that weve seen in years.Edwards added buyers get more from a Homearama home than other houses on the market.You can get a great value in these Homearama homes, because you are getting things you wouldnt normally get in a home for sale, he said.But you dont have to be looking for a new house to attend the event. Edwards said there are several reasons people decide to attend Homearama.He said coming to the event can be a great way for Suffolk residents to familiarize themselves with The Riverfront and Harbour View communities if they havent already.People come to get ideas to spruce up their own homes.People can come and get great ideas, he said. Its a great event to go to.This is the second time The Riverfront has hosted Homearama; the community last hosted the event in 2001.In 2006, homes in Suffolks Pitchkettle Farms community were featured for the event.