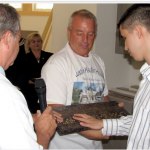 Suffolk News HeraldBy Emily CollinsWhen the Tidewater Builders Association opens the fall Homearama event in Suffolks Riverfront community in October, organizers expect as many as 100,000 people to tour the featured homes.On Wednesday, though, it was all about one young man.Justin Kauflin, namesake of The Justin Kauflin House, the TBAs 2011 fall Homearama charity house was honored during a special dedication ceremony at the house Wednesday morning.This is truly an honor for me that Tidewater Builders Association has chosen to involve me, Kauflin said. Im thrilled to be a part of this to continue to help them make dreams come true.Clark Whitehill Enterprises is building the 3,721-square-foot home, located in the Riverfront at Harbour View, for the event, which is scheduled for Oct. 15-30.What makes the Justin Kauflin house different from the other eight Homearama houses is that all of the proceeds from the home, which is priced at $750,000, will be donated to the Tidewater Builders Association Scholarship Foundation.Kauflin, a graduate of Salem High School in Virginia Beach, received the scholarship in 2004 and went on to study jazz music at William Patterson University. He has gone on to become an accomplished jazz pianist.Kauflin lost his sight at age 11 as a result of a degenerative disease hes had since birth.Michael Newsome, who is the chairman of the TBA Scholarship Foundation and a partner at Clark Whitehill Enterprises, said it felt natural to dedicate the house in Kauflins name, because he is a great example of the excellent scholarship recipients.We looked at each other and said, Justin Kauflin, Newsome said. We said, Is there anyone else? No, hes our guy.The Justin Kauflin House will include four bedrooms and five baths and feature a large porch with a built-in grill, a second-floor porch, 19-foot ceilings in the master bedroom suites and a second-floor teen den.More than 40 companies have contributed supplies and services to the construction and decoration of the home.Mayor Linda Johnson said at the homes dedication that Suffolk is excited to have Homearama back in the city, and the charity house represents a great thing in Hampton Roads.This house is about passion; this house is about love, Johnson said. Justin, this house is for you. This is for your dream.In addition to donating to the scholarship fund, the home is helping to further the dreams of interior design students from Virginia Beach Art Institute and Tidewater Community College, who will help decorate it once construction is completed.The dedication ceremony took place in the bare bones home, which is still being readied for the Homearama kick-off event on Oct. 14.This is the second time the event has taken place in the Riverfront, and the third time in 10 years that Suffolk has hosted it.Homearama showcases fully furnished homes that feature the latest trends in home construction, design, furnishings and technologies.In addition to the Justin Kauflin house, Homearama will feature eight other expansive homes, many of which have specially designed themes, such as one home inspired by ideas suggested by the builders social media friends and another designed for ultimate organization.The homes range from 2,800 to 4,000-plus square feet and are priced at $550,000 and up.