The walls might be up on the Homerama houses, but there is still plenty of work to be done, especially for the homes busy interior designers.With Homearamas opening only two weeks away, the designers are working overtime to get every detail perfected before about 100,000 people make their way to The Riverfront at Harbour View for the showcase.  The next couple of weeks are crunch time, but the designers started their work long before this.Cathy Tellefsen of Complete Interiors is designing House 8, the Tribute to the City of Suffolk, and she got to work on the house immediately following her participation in the spring Homearama event.

Before I was even complete with the spring show, I was picking out the brick for the house for the fall, she said.Tellefsen, who has decorated houses in the showcase almost every year since the event began in 1994, said she likes to start six months in advance. Like Tellefsen, Beth Gilbert of Gilbert Interiors is a Homearama veteran.I went into business 15 years ago, and that September, I was asked to do Homearama, and Ive done it every year since, she said.

However, this year is a little different for Gilbert, because for the first time, she is working on two houses. She designing interiors for both House 2, called Tee Time, and House 7, the Get Pink with Sentara Breast Cancer Awareness house.  Weve never done two homes at the same time, she said. Its a lot of switching hats back and forth.Both Gilbert and Tellefsen have been working on every design aspect of the homes since the builders broke ground months ago.  Gilbert said the first thing she did was decide on a theme.  Once we get the floor plans, we start thinking about the theme, she said.

However, Gilbert said, she cant just pick whatever she wants without finding out what furniture and accessory stores have to offer. Its not like you can just say, I want to do farmhouse country, she said.  Someone might not have the things you need. You have to be careful with your theme-choosing.

Additionally, because House 7 was pre-sold, Gilbert had to consider the homeowners opinions in choosing its theme.  However, she did more than consider the owners opinions; Gilbert was inspired by the couple that bought the home to make it breast cancer awareness, because the wife is a breast cancer survivor.  But instead of painting the entire house pink, Gilbert said, she is using a neutral palette, with colors like beige and chocolate, in the main elements of the house, like the walls and the couches, and is playing with pink accents in the accessories, such as towels, pillows and flower arrangements. Anything where we can bring in some of the pink to remind women to get checked every year, she said.

Next door to the Get Pink house, Tellefsen is working with the city of Suffolk on the theme for that house. Im in the process of talking with several city officials and a number of shops to get pictures and memorabilia from the city to use in the house, she said. We just try to include as much of the citys artwork or memorabilia or anything that relates to the city.Schewels, which is located on North Main Street, is providing most of the furniture for the house.Also, Tellefsen said, she is incorporating the three public high schools colors into the three childrens bedrooms.

In addition to being a nod to the host city, House 8 also has another theme. The home is named the 19th Hole, and Tellefsen said she used the golf-related name as inspiration for the style of her design.My whole vision has been what you would see in a club where they come in from playing golf, Tellefsen said. Its kind of a golf-themed house.After envisioning their designs for the past six months, both Gilbert and Tellefsen are finally able to see them come to life.Tellefsen said once the furniture is in the house, her vision really comes together.It tells me how much I need as far as pictures and other stuff to fill in, she said. Once the furniture is in place, though, Tellefsen added, theres still a lot of work before everything is ready.

For the next two weeks, they will be moving furniture, hanging window treatments, arranging flowers, buying and borrowing additional items to complete the design, and making sure the houses are ready for the opening on Oct. 15.

Homearama opens Oct. 15 in The Riverfront community at Harbour View and runs until Oct. 30. Tickets for the event are $10 for a one-day pass and $17 for two days 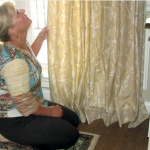