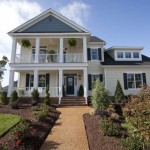 “This social media scene is a new one to me,” said Sasser, president of Portsmouth-based Sasser Construction LLC. “In recent months, it has become more of a reality in the way we build homes and run our business.”

Social media is one small step for Sasser – and one giant step for the Tidewater Builders Association – at Fall Homearama, a showcase of nine custom homes at The Riverfront at Harbour View in Suffolk.

Sasser’s The Coastal Cottage: The Social Media House will catapult the show and builder into the e-revolution.

Local social media guru Damien Smith, founder of Guerrilla Social Media in Norfolk, helped inspire the theme. He’ll be at the house hosting 30-minute courses on social media and how it correlates with job hunting and building a business, as well as ways to keep children safe on a social network. He’ll relate these topics to networks such as Facebook, Twitter and LinkedIn.

In a more traditional sense, bringing people together is what Sasser Construction has been doing all along.

“The kitchen/breakfast/family is one large open space that has a large island for gathering, a large built-in breakfast banquette for family meals, and a tech center/study nook for children’s homework or for the parents to pay bills,” said Sandra Figeac, the builder’s construction manager.

The Simply Custom Collection home has 3,351 square feet, four bedrooms and 3 1/2. There are also first- and second-story front porches, a back deck and seating areas.

Besides the house being conducive for social interaction, Sasser hopes to have a live Twitter feed about Homearama happenings. The company already has set up a Facebook page and hopes to dive into the deep end of the social media markets.

“Companies are starting to understand they need to have some sort of social network connection in order to stay relevant,” Smith said. “We are here to educate businesses and families how to best handle what they have at their fingertips.”

Smith and partners will also present courses that cover how the social media markets can help during economic hard times. On Wednesday there will be a special Realtors Day presentation starting at 10:30 a.m. The classes will cover how to use social media specifically for buying and selling homes.

“Everyone who attends the classes will come away knowing effective tools to grow their social media networks,” Smith said. “The outlets can be valuable tools instead of just another thing that employees have to do.”

Sasser said his company’s Facebook page is already paying off.

“It is helping us stay in touch with our clients and understand their wants and needs,” he said. “It’s a whole new line of communication.”

By Staci Dennis
The Virginian-Pilot
October 19, 2011