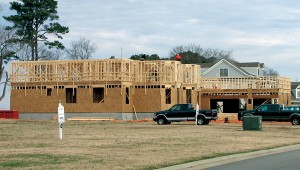 With plenty of available space and easy access to water and sewage, North Suffolk has become a prime location for new home construction. Additionally, the areas central location makes it a good place to build a home, even in a slow real estate market, according to builders and developers in the region. Eric Sasser, the president of Sasser Construction, said his company builds homes in all of Tidewater, but he has had a lot of success in the northern part of Suffolk. North Suffolk is a big section for me, he said. Its probably been one of the best areas for me. Sasser said new home construction is big in North Suffolk, because there is a lot of available space and a higher demand, but the biggest reason a lot of homes go up is that the area has good access to city water and sewage. If water and sewage is available, you just go down and pay your cap fees and you take your plans to the city to get a building permit, he said.

Cindy Taylor, assistant planning director for the City, said water and sewage are one of the main reasons North Suffolk has more new construction than the southern part of the city. The big difference between the two is with the city utilities available, she said. She said the region can have large subdivisions, like The Riverfront and Parkside, because it is designated for growth by City Council, unlike Holland and Whaleyville. The main thing down there is they are not allowed to do major subdivisions, because they dont have water and sewage, Taylor said. She said she doesnt think the process to get a home built is more difficult in the southern part of Suffolk, but there are more steps. Sasser also said the home building process is smoother in Suffolk than in other Hampton Roads localities, because Suffolk has committed city employees. They are probably one of the easiest cities to work with, he said. They are very timely about getting (permits) done.

Mark Edwards, senior vice president and broker for East West Realty, which handles property in The Riverfront, said he thinks new homes go up so often in North Suffolk, because builders know they will sell. Its a result from a really good spring and fall, Edwards said. Now, youre seeing the houses start, because when you sign a contract it takes a while to get the builder out of the ground. Some builders are also putting up speculative homes, built in anticipation of sales next year. A lot of people out of town cant wait for a home to be built, Edwards said. North Suffolk is a great place for a builder to have a speculative home. They like to keep homes available, because it is an area people are moving to. Edwards said he thinks another thing North Suffolk has going for it is its amount of available land. Northern Suffolk theres a lot more places zoned for residential development, he said.

Sasser and Edwards agreed that now is a good time to build a new home. You can build a home you want at surprising values, Edwards said. Builders have gotten very competitive in new homes that they build, because consumers are cautious about the value. Sasser said land prices have dropped, labor rates are low and material prices havent risen in a while, so building a new home can be as affordable as buying a previously owned house.While there has been a lot of development and building in the past decade in North Suffolk, there is still a lot of available space, and Sasser thinks it will continue to be a popular location for people to build new homes. I think youre going to find thats going to be the area of growth for a lot of Tidewater for the next 10 years at least.