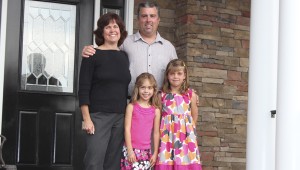 The Mallas family decided to build a new home in a different subdivision in Suffolk, mostly for the sake of their children. Other kids for 8-year-old Kelsey and 5-year-old Kiera to play with were scarce in Olde Mill Creek. Parents Kyle and Katie Mallas had moved there from Virginia Beach in 2001.

Another relocation had been in the back of our minds for about three years, Kyle Mallas said, when they decided to build in Harbour View subdivision The Riverfront. They moved in last August.

I would say the market was somewhat of a factor, but it really had a lot to do with quality of life, Mallas said of deciding to take the plunge. We totally enjoyed the last house we lived in; we had a bigger piece of property and a little more privacy. But we have upgraded our lifestyle to a newer and more prestigious house, I guess I would say.

The Mallas family built in what was the worst year for construction since the Great Recession hit Suffolks new home market like a sledgehammer in 2008, according to city permit figures for the past 5 years.

But things have begun to pick up in the new-construction market, based on figures from the first half of the year.

In the six-month period ending June 30, permits were issued for 37 multi-family dwellings and 146 family homes, worth $4.34 million and $24.94 million, respectively.

Its evidence of a nascent recovery if the figures are doubled for a full 12 months and compared to 2011.

Mark Edwards of East West Communities, developer of The Riverfront, reports 17 new home sales there so far this year and 45 since last May, when he said the uptick began.

I think its a good sign that we have turned the corner, he said. I would go as far as saying we would be selling more new homes this year if we had more new homes available to sell.

The Mallas family has now settled into its smart new home at The Riverfront, with restaurants, a movie theater, ample shopping and various recreation options all within easy reach.

The day after we moved in, there were 10 kids out in the front yard playing with our kids, Kyle Mallas said. Im very at ease and feel very fortunate that we are where we are.