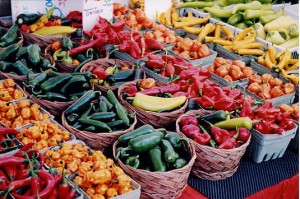 Once earmarked for an oil refinery, Harbour View in North Suffolk is now offering something entirely different organic produce for sale in the open air.

The bi-weekly Harbour View Community Farmers Market opened in late April to rave reviews, offering a range of healthy foods available direct from local farms. The farmers set up shop on a five-acre lot on the corner of Hampton Roads Parkway and Harbour View Boulevard, adjacent to The Riverfront community, from 3:30 to 7:30 p.m. on Thursdays, and 9 a.m. to 1 p.m. Saturdays. They will continue this neighborhood presence through the end of October.

The idea for a farmers market at Harbour View came from Lucille Copeland, now in her 90s, who farmed the area with her late husband Tom from 1940 till 1994. Thats when developer Bob Williams, who presented the farmers markets plan to the city of Suffolk and obtained the necessary permits, began developing the area into todays modern shopping and business precinct. The site owner, Chicago Bridge and Iron Company, had once planned an oil refinery, but the land had sat unused for years.

Other farmers market proponents include Hampton Roads state delegate Johnny Joannou and Suffolk attorney Jesse Johnson. I was able to contact Bob Williams and talk to him, and he has graciously let (us) use the site, Johnson said. We helped him with the process through the city, and they were very gracious. He said a North Suffolk farmers market would complement the existing farmers market in downtown Suffolk, as well as the range of food available from local grocery chains. I think it will be a terrific asset to the area, he said.

Market entry and parking are free.