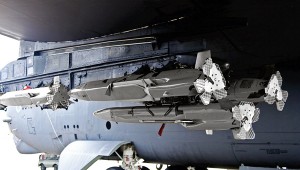 A North Suffolk defense contractor is about to ramp up production of a specialized piece of equipment for use by the U.S. Air Force.

Cobham Composite Products has created a couple of test fuselages for the MALD-J (Miniature Air-Launched Decoy Jammer). The Air Force has since run successful tests on the equipment.

The device, which weighs less than 300 pounds, can be mounted on the outside of any aircraft. It then flies off, up to a range of about 575 miles, and can be made to look like any type of aircraft on the enemys radar.

They can make it look like a bomber, a jet, anything they want from a radar point of view, said Gregg Strangways, director of operations at the Suffolk facility. The more confusion you can create with the enemy, the better off your safety is with your actual pilots and infantry.

Cobham creates the shells of the devices in Suffolk and sends them to a Raytheon facility in Arizona, where the fuselage is fitted with the electronics that make it work.

But Cobham hopes to get the contracts for those untold numbers of devices. If they do, it could mean more jobs for Cobham, and for the city.

We already have over 30 jobs dedicated to this one program, many of which are recent hires, Strangways said. Weve been ramping up our headcount.

Full production of the first batch begins next week, he added. If future contracts are funded, the Suffolk workforce could triple, Strangways said.

Its a great program, he said. It could ramp up within the next couple years pretty significantly.

Cobham opened the 73,500-square-foot facility off of Harbour View Boulevard in May 2010. It was intended to complement the companys other location in San Diego, Calif.